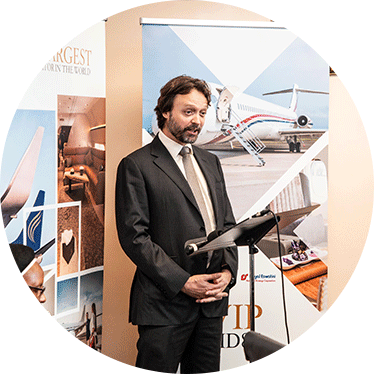 ROYAL Jet Commercial Director Simon D’oyly has said the company has a long term vision of establishing a fully-fledged base which will include a maintenance wing that will result in skills development and job creation for Emaswati. D’oyly said their company was launching a 30 Seat Boeing Business Jet in Eswatini aircraft together with the MD87 to their clients in Africa. He said the partnership has long term gains for the country stating that they were hopeful that the partnership will lead to more of their aircrafts being based in the region. He disclosed that they have been operating in Africa for many years now but Eswatini is the first country where they have a base in Africa. “Royal Jet has been operating flights into Africa since 2003 with its Gulfstream G300s and operating Head of State and other VVIP missions with its Boeing Business Jets since 2005, but this venture marks the first occasion we have based an aircraft in Africa.

Our partnering with RENAC and indeed the Kingdom of Eswatini reflects our belief that this Hidden Jewel of Africa is set to burst onto the world’s tourism stage in spectacular fashion. I can think of no other country or airport where a business jet or VVIP airliner can land at an international airport and within 20 minutes the passengers could be in a game reserve seeing the Big Five,” he said.

He said the aim of this venture is to grow Royal Jet’s engagement with Eswatini, to develop mutual business opportunities and to transfer skills his company has developed over the past 17 years into the local aviation sector.
He said their interest in Eswatini lies also in supporting Head of State and VVIP transportation within Southern Africa.