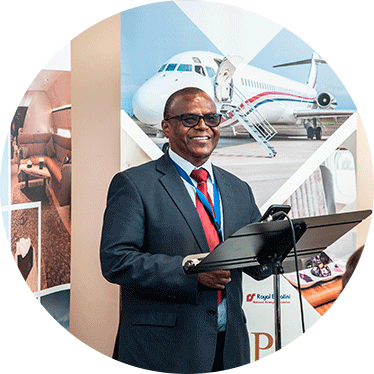 How will RENAC benefit?

RENAC CEO Capt. Qiniso President Dhlamini first thanked His Majesty the King for the role he played four years ago in the acquisition of the deal. Dhlamini stated that the partnership with Royal Jet was one of the few projects that are in the pipeline by RENAC in transforming the aviation industry.

Dhlamini said there would be a lot of skills transfer to local engineers from their well-established counterparts from Abu Dhabi
He explained that the jet would be fuelled at the KM III International Airport, with revenue going to RENAC. He further mentioned the Corporation would receive a commission for the hiring of the jet.

“We can’t disclose at this stage the percentage of the commission but RENAC will benefit from this partnership,” he said.
He said the jet would also pay for landing and parking at KM III. He pointed out that they needed substantial money to rebuild the public enterprise. Dhlamini said the jet crew would be booked at Royal Villas.

“While they are booked there, a local establishment will benefit from the rent,” the CEO said.
He announced that the State’s jet, McDonnell Douglas DC-9-87 would also be available for chartering in future. The Chief Executive Officer mentioned that RENAC was in the process of getting an air charter certificate for the McDonnell Douglas-9-87.